Dr. Prakash Kankaria is an eminent eye surgeon from Ahmednagar, Maharashtra. He is known intentionally for his outstanding skills in Laser eye surgery, corneal transplant surgeries and advanced cataract surgery. Dr. Prakash is thechairman and medical director of Sai Surya NetraSeva( Research and Training) Institute, which was established on 15th August 1985. The objective of the institution is to provide world class eye care at affordable price. The service is more focused on rural, poor and unprivileged ones. Dr. Mrs. Sudha wife of Dr. Prakash, looks after the institute with the well trained team of doctors and staff. The team is working for this mission since last 32 years. Their hard work has made Sai Surya NetraSeva one of the premier eye care institutes of this country.

Dr. Prakash Kankaria completed medical graduation and post-graduation in ophthalmology from Swami RamanandTeerth Medical College in Ambejogai. After his studies, he joined Civil Hospital of Ahmednagar and served for 3 years. During this period,he organized many camps and operated thousands of poor and needy patients to give them vision. He was keep on acquiring knowledge and skills of advanced trends in ophthalmology Dr. Prakash was fortunate to have short fellowship in Russia with international legend Dr. Fyederov in refrative Surgery. It gave him the global vision. He also had the opportunity to work with giants like Dr. P. N. Nagpal (Ahmedabad), Dr. Daljeet Singh (Amritsar). 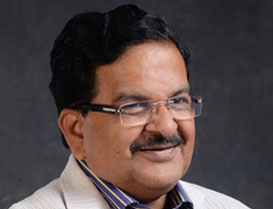 Dr. Haradia (Indore), Dr. Reddy (Hyderabad) in this initial period. His curiosity forced him to attend various conferences at national and international level. Refractive surgery to eliminate glasses and give perfect vision to the youth was primary focus. Dr. Charles Casabeer, Dr. George warring (USA), Dr. Pallikaris (Greece), Dr. Arthur Lim (Singapore) were few of the international giants, who inspired him throughout.

Dr. Prakash started Redial Kerotomy and Intra Ocular Lens implant surgery in 1985 and became pioneer of refractive surgery in India. He started phacoemulsification surgery in 1988 which became popular in India later on Solid State Refractive Laser in 1993. His thirst went ahead and started first private Eye Bank in Maharashtra 'Mankanhaiya Eye Bank' in 1995. He promoted eye donation in this part of country through various awareness programs. Dr. Prakash has performed more than 1400 corneal transplant successfully. This year 'Mankanhaiya Eye Bank' received recognition as one of the best run eye banks from Maharashtra. He is President of MOS, State ophthalmological society in its silver jubilee year and as founder national president of 'Refractive Society India'. He is member of many international organizations as American ophthalmic Academy, European Society of Cataract and refractive surgery, international society for refractive surgery, Asia Pacific ophthalmological society and world ophthalmic congress.

To reach to population with his expertise. Dr. Prakash conducted many camps for the community at various places in India. With more focus on marriageable girls, his 'VivahDirshtiBhet' helped thousands get rid of spectacles. Institute also runs mobile eye clinic 'SaiDirshtiYatra' which visits remote places to provide eye care to the unprivileged ones. This is a state of art, well equipped van with well-trained team. Free eye camps are organized every week for cataract and other ophthalmic problems. Freedom fighters, as a respect to their contribution are treated free of cost.

Wavelight Germany honored him as 'Fastest Surgeon of the World' and he found a place in Limca book of world records as well. Records also has been recognized and appreciated by the president of India Hon. Smt. Pratibha tai Patil Chief Minister and Health Minister of Maharashtra along with President of All India Ophthalmological Society. He is proudly mentions that he has collection of more than 8000 wedding invitation cards from the girls, who got married because of his surgeries. More than 100 youngsters have joined career as Pilots, Navy, Army, Police Force, Railways etc.

Dr. Prakash has many more facets to his personality. He has developed project 'Saiban' which is waste land development project on industrial waste water. He managed to transform over more than 100 Acres of hilly terrain in to a green paradise. For which he received prestigious 'Vanashree' Award from Maharashtra State Government and recognition from Government of India. He is working as secretary of Indian Red Cross Society and was President of Indian medical association in Golden Jubilee years for which, he received awards at state and national level. While working as president of Rotary Club, he constructed a colony for blinds for which director of rotary international himself was present to grace the occasion. Dr. Prakash has worked in capacities of vice president of football association, Medical Director of 200 Bedded multi speciality Charitable 'AnandRishiji Hospital and Heart Surgery Center' President of Mankanhaiya Public Charitable Trust and Eye Bank, President of 'Nisarg' a nature loving club. He has developed centre of modern eye care in Pune and Mumbai and has got dream to develop a world class Laser Eye Surgery Centre of Saiban, which he fondly calls 'Dreamland of Vision'.